The Sexual Exploitation of Young Girls in Japan Is 'On the Increase,' an Expert Says

Kurumin Aroma felt like her life was over at just 21. She was about to enter her senior year at college, had already been accepted onto a stuffy conglomerate’s graduate program, and was staring at years shuffling paper in a beige cubicle.

So when the suave man with flash business card approached her in Tokyo’s bustling Shinjuku neighborhood, talking enthusiastically about a career in modeling, dreams of exotic photo shoots and star-studded parties washed over her.

“It was perhaps a little easier for him to persuade me than it should have been,” Aroma, who uses an alias in public, tells TIME.

Fast forward eight years and Aroma looks back at the episode with crushing regret. But she is determined to weaponize the ensuing trauma to help stop others from becoming, like her, one of the hundreds of young Japanese women coerced into pornography by tricksters masquerading as legitimate modeling agents.

After being pressured into signing a convoluted contract, and flown to a remote location far from home, she was bullied into sex acts before rolling cameras, with threats of legal repercussions if she didn’t acquiesce. “I really didn’t feel I was able to say no,” she says.
(リンク先に続きあり) 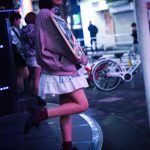