The 39 people found dead in a refrigerated trailer in Essex were Chinese nationals.

Police are continuing to question lorry driver Mo Robinson, 25, on suspicion of murdering the eight women and 31 men.

Officers in Northern Ireland have raided three properties and the National Crime Agency said it was working to identify "organised crime groups who may have played a part".

The trailer arrived in Purfleet on the River Thames from Zeebrugge in Belgium.

Ambulance staff discovered the bodies in the container at Waterglade Industrial Park in Grays just after 01:30 BST on Wednesday.
The lorry and trailer left the port at Purfleet shortly after 01:05.

Police said the tractor unit – the front part of the lorry – entered the country via Holyhead in Wales on Sunday, having travelled from Dublin.
（リンク先に続きあり) 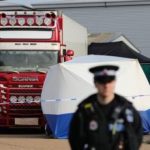 Police are continuing to question lorry driver Mo Robinson, 25, on suspicion of murdering the eight women and 31 men.